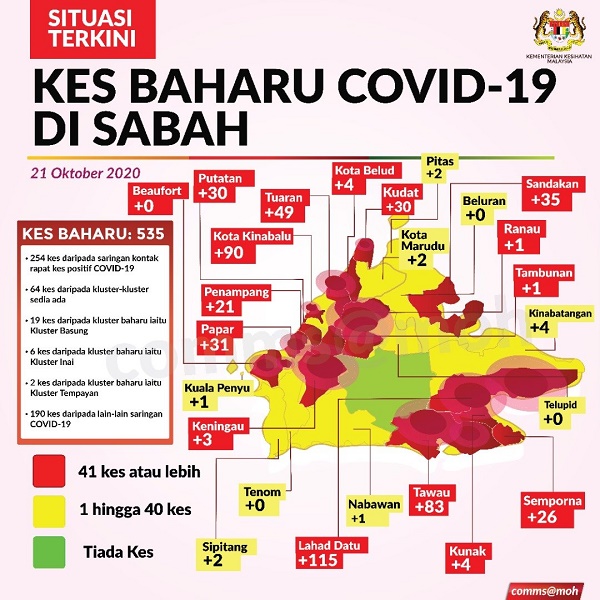 Nabawan, previously a green zone or district without active cases for months after its first two cases recovered, saw one new case and left Tongod as Sabah’s only green zone.

Kinabatangan, a yellow zone or district with between one and 39 active cases, registered four new cases, after showing 30 active cases the previous day, nearing the red zone’s threshold of 40 active cases.

More than half of Sabah, or 16 districts, are red zones while nine are yellow zones.

Meanwhile, Lahad Datu topped Sabah’s list with 115 new cases, more than Sabah’s current epicentre of the pandemic Kota Kinabalu, which recorded only 90 new cases after registering triple-digit cases for consecutive days prior, as the state recorded 535 new patients and continued its trend of topping the national daily caseload for weeks now.

The state also saw five more deaths -- three in Sandakan and one each in Kota Kinabalu and Semporna -- while Labuan recorded one, its first fatal case.

Sabah’s R naught or infectivity rate is 1.3 (second below Selangor’s 1.4), which could have been lower had it not been for “isolated cases in prison”, said the Ministry of Health.

A total of 580 more patients nationwide were discharged, including 305 in Sabah.