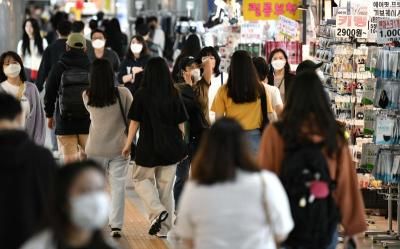 People wearing face masks walk through an underground shopping area in Seoul on May 6, 2020. - AFP

SEOUL (The Straits Times/ANN): South Korea is bracing for an "inevitable" second wave of the coronavirus, even as the country eases social distancing amid a slowdown in new infections.

A new case of local infection - a 29-year-old man who went club-hopping - has already triggered alarm.

But health officials say they will be better placed to combat the virus the next time round, given their success in containing the outbreak so far.

Only four new cases were reported on Thursday (May 7) - a far cry from the peak of 909 on Feb 29 when mass testing was conducted on over 200,000 members of a religious group at the centre of the first local outbreak.

The total infection tally to date is 10,810, with 256 deaths and 1,135 people still undergoing treatment. The rest have recovered.

Health Ministry spokesman Son Young-rae said at an online briefing Thursday that a second wave is "inevitable" given the extent of the pandemic that originated in China.

There are now over 3.8 million confirmed cases all over the world, with the United States, Spain and Italy among the most severely hit.

Responding to a question on how prepared South Korea was for another outbreak, Son said the country's surveillance system and screening capability would be able to identify a potential spread linked to a confirmed case almost immediately.

He added that they would also be able to conduct contact tracing more effectively and block the spread of the virus. Only 5 per cent of confirmed cases came from unidentified sources, he pointed out.

"A second outbreak will be inevitable at some point, but it will not be like the first wave that saw an explosive surge," said Son.

"Given our social distancing policy, the outbreak will be contained in much smaller clusters. The speed of infection will also be slower."

Tuesday marked the last day of a stringent six-week-long social distancing campaign that saw the closure of public facilities such as parks and libraries, and entertainment venues including cinemas and bars.

Concern is already rising over possible new clusters forming over the recent long weekend due to three back-to-back public holidays from April 30 to May 5, as hundreds of thousands of people travelled domestically.

It could take up to two weeks for cases to emerge, given the incubation period of the virus.

Health officials have constantly urged people to remain vigilant and abide by "everyday life quarantine" rules such as washing hands for 30 seconds and ventilating one's house more than twice a day.

A case of local infection has already caused jitters.

A 29-year-old man from Yongin city, south-east of Seoul, who travelled from his hometown with three friends last Thursday and then went club-hopping with one of them in Seoul last Friday, tested positive for the virus Wednesday.

He was the only local infection among the four new cases announced Thursday, and the first in four days. The others were all imported cases.

The friend who went travelling and clubbing with him, a 31-year-old resident of Anyang city, has also tested positive, according to Anyang officials. Details will only be announced Friday.

Authorities said the 29-year-old man is believed to have come into contact with up to 2,000 people over the six-day break. Contact tracing is underway, and 43 of his colleagues have tested for the virus.

He had travelled to Seoul, Gapyeong, Chuncheon and Hongcheon last Thursday and visited five clubs in Seoul's nightlife district, Itaewon, from Friday night into the wee hours of Saturday. He developed a high fever and diarrhoea late Saturday and went to a hospital the next day.

Three of the clubs he visited were identified - King Club, Queen and Trunk, all of which were known as gay bars. King Club confirmed his visit on social media and said it had complied with the government's quarantine measures such as checking temperatures, asking visitors to wear masks, and keeping a record of visitors.

Health authorities said he did not travel overseas recently and had no known contact with any confirmed cases.

Until a vaccine is developed, the coronavirus can keep reappearing, warned Son of the Health Ministry.

"The government is prepared to face a second wave. The key is how to contain the outbreak more efficiently while leading a normal life. " - The Straits Times/Asia News Network

Source: The Star
Back to News
Share
© 2022 SabahOutbreak.com · We Care