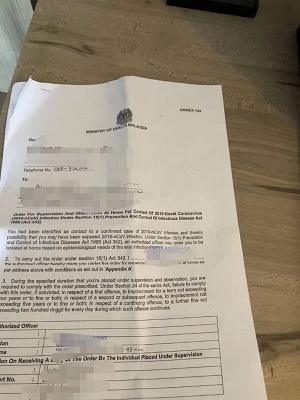 KOTA KINABALU: Health and People's Wellbeing Minister Datuk Frankie Poon has confirmed that the viral photo said to be of a Covid-19 quarantine order issued by the Kota Kinabalu Health Area Office pertains to a suspected case which is being home-quarantined and linked to a positive one.

The Minister, in an update in the Ministry's WhatsApp group, however, did not say where the positive case had been detected despite requests for clarification on the matter in the group.

The document states the name and passport number of the suspected case, who is likely a Chinese citizen. The quarantine order is dated Feb 26, 2020.

"Members of the Media. Thank you for your concern over the viral document. I wish to state as follows after seeking clarification from the Pengarah JKNS [Sabah Health Director]," said Poon in the update Friday evening.

"I like to confirm that the viral letter was actually issued by Pejabat Kesihatan Kawasan Kota Kinabalu {Kota Kinabalu Health Area Office}.

"She is advised to be in home-quarantine. Please advise everyone not to spread the wrong message."

The government has not announced any positive Covid-19 case in Sabah while in the peninsula, where Health authorities have been much more forthcoming with timely updates to the media and the public in WhatsApp media groups, websites and social media, 25 positive cases have been reported with most of them having recovered and been discharged from hospital.