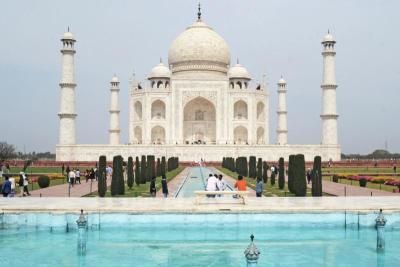 MUMBAI (Reuters): India closed the Taj Mahal, its top tourist site, and the financial hub of Mumbai ordered offices providing non-essential services to keep half their staff at home as efforts to control the spread of coronavirus in South Asia ramped up.

Mumbai, a densely populated metropolis of 18 million, also authorised hospital and airport authorities to stamp the wrists of those who have been ordered to self-isolate with indelible ink reading "Home Quarantined" and displaying the date until which the person has been ordered to self-quarantine.

India's western state of Maharashtra, home to Mumbai, has been the hardest hit in India with 39 confirmed coronavirus cases, or roughly a quarter of the 125 confirmed cases in the country.

Along with the Taj Mahal, dozens of other protected monuments and museums across in the country including the Ajanta and Ellora caves and religious sites such as the Siddhivinayak temple in Mumbai, were ordered closed.

India expanded its travel and visa restrictions on Monday, banning passengers travelling from member countries of the European Union, the European Free Trade Association, Turkey and the United Kingdom.

Separately, Pakistan reported the number of confirmed coronavirus cases in the country had more than doubled for a second consecutive day, reaching 183.

Officials said the jump was largely due to errors in the testing and quarantine of travellers who recently returned to the country from Iran.

Authorities in India and the wider South Asian region have struggled to get travellers to self-isolate, or stay quarantined in medical facilities that many visitors view as poor and unhygienic.

At least 38 Afghans, who had recently returned from Iran and were being kept in isolation, escaped from a quarantine facility in western Afghanistan on Monday after breaking windows and attacking hospital staff.

At least one of them was confirmed to have the coronavirus.

Separately, in Navi Mumbai, a suburb of India's financial hub, local media reported that 11 people, who had been isolated after returning from Dubai, also fled the hospital, forcing police to launch a manhunt.

Although South Asia has been relatively lightly hit by the coronavirus spread, authorities fear that measures to rein in the spread of the disease that were used in China and South Korea would be hard to enforce in poor, crowded parts of South Asia that often lack adequate healthcare facilities.

With the overnight spike of cases in Pakistan, the overall number of confirmed cases in South Asia is now approaching the 400 mark. - Reuters